I told you a few entries beofore i had tickets to the Wu Tang Killa Beez concert in Bucharest. All i can say is that it was by far THE BEST CONCERT I’VE EVER ATTENDED TO. Last september i was at the Kid Koala concert and that was amazing too, but you cannot compare it to this one.

We left Targu Mures on February 15th at 7 am and we arrived at Sighisoara with cars one hour later. From there the took the Inter City, it was such a blast on the train, we kept on telling jokes and started imagining how will the concert be like, did some pics.. i was really impressed by the beautiful sights of our country.. take a look at these pics with the mountains near Brasov.

The first oine is took in the train station at Sinaia i think.. the snow was beautifull i couldn’t resist not to imortalize the image.
The next two images are taken shortly after, amazed by the clouds or fog that was on the mountain peaks

Ok, finally we arrived in Bucharest at 1.30 PM. We met Spooke who we’ve hanged with untill about 3 pm when me Paula and Sauce went to visit the Romanian Museum of History. It wasn’t as i’ve thought it would be, there were basically just 2 major objectives: Traian’s column and the Romanian Treasure (tons of gold from the oldest times).. well.. what could been recovered from the Russians.

At 17.30 we went to meet with the Hades Records crew & friends. The purpose of the meeting was to go all of us organized to the place where the concert was supposed to be. That meant switching the subway 2 times. Imagine a group of about 200 rappers waiting to get in the train.. you don’t wanna know how frighten the people in the train were when they saw us :))
I goit to meet with some friend on some forums i’m into, some rappers in the industry, it was all OK./
The show started at about 8pm i think and it was hosted by Nai’gh’ba of Da Hood. The first performance came from Turntable Science (DJ Dox, DJ Paul, DJ Undoo, DJ FaiboX) who entertained the crowd for about 30 minutes. After that, it was time for the most well known band in Romania to continue. Parazitii rocked the mic for another hour, and at one time they had this great ODD which left everyone with their mouths open.
Everybody expected to see Salah Edin next (who was supposed to sing in the oppening of the Killa Beez) but instead, the Wu entered the stage and they sang few songs, then Salah entered and sang his part, it was aaaaal craaazy, nobody was expecting for such an amazing show.
The concert was over at 11.15 pm and it was time for me to go buy my Shabazz the Disciple CD. Shabazz was very cool, and he signed it for me.

The only thing i now regret is that we should have made it to the after party too, but we lost contact with our middle-man. Anyway, i was pretty tired so we went to my man to take a few hours of sleep, but the next day at 8 am we were up.
I never miss the chance in Bucharest to take pics near the biggest building in the world after the Pentagon. 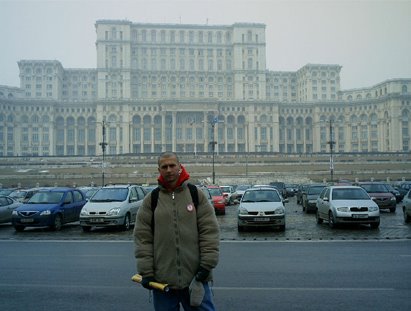 Before taking the train to return home, we visited the Military Museum. Now that is something everybody should see if they go across the country. It is something so big and so amazingm, words cannot describe. Weapons from the neolithic and untill today. Scenes from different wars (including WW1 and WW2), King Carol’s sword and a special section dedicated the the revolution from December 1989. It’s a definitely must see place. In the interior yard there were tanks, TABs, planes and other military automobiles. It took us about 3 hours to see everything.

We finally took the train at 4.50 PM and arrived in Sighisoara at about 9 PM. the road from there to Tg Mures was very difficult because it snowed for 2 days and some accidents happened on the road that day, so it took us more than one hour, but we finnlly got home safe and healthy :)

Comming up next, the GZA on April 4th :D

PS: Thanks to all my friends who were there with me:
Sauce, Paula, mOW, Alex, Creify. Soon we’ll do it again!

[…] After the Wu Tang Killa Beez entertained Romania on February 15th, it’s time now for a real general of the Wu Tang Clan to come and sustain a concert in our nations capital. Raekwon will be promoting his new LP Only Built 4 Cuban Linx Part 2 and there are not that many tickets abailable. The price of a ticket is 55 ron (about $20) which is pretty much for a regular romaniajn to pay, but hey.. if you love hiphop, you do sacrifices. The concert will be on april 5 and i still don’t know if i’ll go or not. At the Killa Beez there were 5 of us going, now nobody knows what to do. Maybe it’s because it wasn’t announced early enough. Anyway, i’ll keep you up to date with this. […]